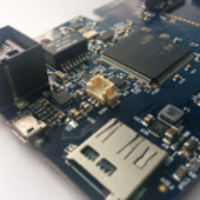 The led module can be used to change the brightness off the on-board LEDs.

There are 4 LEDs which can be controlled. The LEDs are driven by a PWM signal allowing to change the brightness.

Valid values for the 4 different LEDs are between 0 (off) and 255 (full brightness).

In the field approach each color of a led will be used as an individual led.
In practice an RGB led is one physical led which consists of 3 leds which emit one color.

With the functions below it is possible to set a physical led, with a certain color.